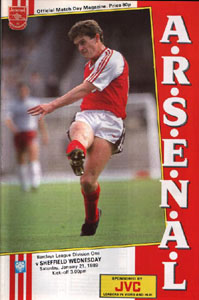 Brian Marwood on the front of the programme January 1989

No Arsenal Championship winning side has picked up the trophy without the assistance of a top class winger and I respectfully suggest you give consideration to Bastin, Armstrong, Limpar and Overmars if you question this statement. Ironically Brian Marwood would not ideally have chosen this particular role when he contributed so much to our 1988-89 season.

Born in Seaham near Sunderland, the club he supported as a boy, Brian could have signed as a Northants cricketer but instead chose to leave home for the delights of a footballing apprenticeship at Hull City. His time at Hull spanned seven managers, relegation and very real threat of liquidation together with the opportunity to ply his craft in the lower divisions of the Football League with an often-struggling club. Hull were promoted in the 1982-83 season when he top-scored from midfield with nineteen goals, including three penalties. Having gained promotion with the club and also having been leading goal scorer for two seasons he was less than impressed when he wasn’t offered an improved contract. It appears he had the choice of two clubs at this stage in his career. They were Sheffield United, a Second Division side who at the time were managed by his boyhood hero Ian Porterfield, a cup winner with Sunderland. Or the then top flight Sheffield Wednesday under Howard Wilkinson.

Wednesday won his signature because they offered the chance to play at the highest level, but he was astonished at the intense physical training imposed under Wilkinson. His biography 'The Life of Brian’ outlines the many strange and outlandish experiences suffered by various players under of this eccentric manager but acknowledges that he become a much tougher player both physically and mentally under his guidance. He wasn’t impressed however by Howard lying to him about transfer bids made by Arsenal when it appears he was the only one not in on the almost open secret. So after three seasons, 128 appearances and 27 goals with Wilkinson’s Wednesday he moved on to better things.

He accepted the move to Arsenal because he realised that opportunities to play for a class club were very limited. Despite finding that George Graham wanted him to play wide on the left and despite the fact that his basic salary left him financially worse off after taking account such factors as housing and transport he was pleased to be given the opportunity with a big club. So in 1988 Graham picked up one of his more astute bargains for a mere £600,000.

It was with Arsenal that Marwood won his only England cap as a 28-year-old. He came on as a late substitution, replacing Michael Thomas, against Saudi Arabia in Riyadh under manger Bobby Robson. Why Robson discarded him after this minimal 9-minute outing is not clear, but then who has ever understood or agreed with the selections of the mangers of team England?

Marwood was injured half way through his Arsenal debut away to Oxford but scored a penalty in his home debut against Coventry in a 1-1 draw. Signed by Graham in March, Brian had played just three and a half games for Arsenal when he turned out in a pre-season tournament at Wembley against Spurs, Liverpool and Bayern Munich. Two goals against Spurs in a three-nil win and we knew Brian was all right by us. No Gunner has ever devised a better way to win over the fans than scoring against that lot.

Those who saw him remember him with affection as a diminutive wide-man who made intelligent use of the ball. Very much a two footed player who could accurately centre from the touchline with either foot. We enjoyed that dip of the shoulder as he went past his man giving himself just a bit more time to hit a pinpoint cross. Brian was a provider but it shouldn’t be forgotten that he scored in each of our first five games in the Championship season. He was also a reliable penalty taker and very accurate from corners and other dead ball situations. A fact much appreciated by Alan Smith amongst others in a season when Arsenal were top scorers in the League. As Arsenal fans we can only really visualise him as an out and out winger but there was more to his game than wing play.

Out injured towards the end of the championship season and for much of the following season he moved on to Sheffield United in September 1990. As an obviously articulate man it was no surprise that he went on to chair the Professional Footballers Association and that he also become a regular TV soccer pundit.

His biography 'The Life of Brian'

Went on to Sheffield United, Swindon and Barnet