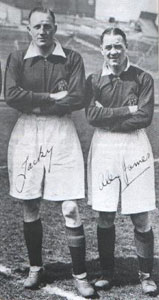 Saturday April 26th 1930 - the day it all began. For the first time in their history, Arsenal were the winners of a major domestic competition - the FA Cup. The victory over the dominant team in English football at the time, Huddersfield Town, was a hard fought one, and at many points during the match the result looked likely to go in the northern club's favour. Having gone a goal ahead, Arsenal defended deep, and almost let it slip before scoring their second, crucial goal, to win the game 2-0. The scorer of that goal instantly wrote his name into the history books. The scorer of that goal was Jack Lambert.

Lambert was signed from Doncaster Rovers for £2,000, the perfect front man to fit into Herbert Chapman's masterplan. Chapman had, through luck more than judgement if truth be told, found himself a pair of wingers in Joe Hulme and Cliff Bastin that could almost single-handedly terrorise the opposition into submission. However, as much as the two wide men were famous for coming inside the full-back, a winger cannot be a centre-forward at the same time, and while the pair's goalscoring exploits are well documented, Lambert was needed to both create a diversion and havoc in the defence, as well as mopping up any leftovers from the flankers' attacks.

Of course, to say that Jack Lambert was Herbert Chapman's first and only choice up front would be to flatter the big man - the manager was constantly looking for the Scotsman's replacement. However, the likes of Ernie Coleman, David Halliday and Jimmy Dunne, while excellent players in their own right, could never quite match the skill, power and determination of Lambert. Only the signing of Ted Drake by George Allison successfully filled the hole left upon Lambert's departure.

Lambert made his Arsenal debut in a 2-2 draw away to Bolton Wanderers on September 6th 1926. Six weeks and seven appearances later, he scored his first goal for the club, in another 2-2 draw, this time against West Ham at Highbury. This was his only goal in 16 games during his first season, an eventful campaign for the club as it saw the Gunners reach their first ever major final. Cardiff City eventually took the FA Cup 1-0 however, Lambert playing no part in the final or in any of the preceding rounds.

Jack's next season was equally unspectacular. He again made 16 appearances, netting three times in the process. The 1928/29 season was even worse for the big Scotsman, playing only six times, and scoring just a single goal. However, as this goal was against Huddersfield Town in a 2-0 victory, with hindsight he might be forgiven for attempting to make history a year too soon.

However, the historic 1929/30 season saw a sudden change in Lambert, and although his league appearances still only numbered 20, his goalscoring seemed to have a life of its own. He announced his intentions in the fifth game of the season, his first appearance of the campaign, scoring a hat-trick in the 6-1 thumping of Burnley at Highbury. Incredibly, three more Lambert hat-tricks followed that season. He netted three against both Grimsby Town and Everton at Highbury, and bagged another trio of goals in the 8-1 demolition of Sheffield Wednesday, also at home. He finished the season with 19 league goals to his name.

His contribution to the cup run cannot be understated. Lambert played in all seven games prior to the final, including the crucial semi-final replay against Hull City. He scored against both Chelsea and Middlesbrough en route to Wembley, and bagged a brace against West Ham. 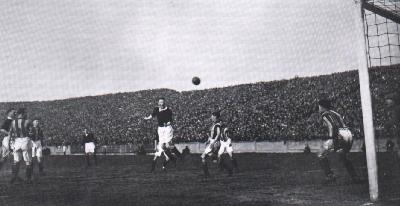 Lambert's Cup Final goal has gone down in Arsenal history as one of the most glorious moments the club has experienced. Having spent most of the second half, following the opener from the mercurial Alex James, on his own on the halfway line while the rest of the team repelled the Huddersfield attacks, Lambert suddenly found himself with the ball in the centre circle following James' long clearance. He turned, slipped past Huddersfield defenders Joe Spence and Roy Goodall, and hared off down the pitch. Hugh Turner in the Huddersfield goal was woefully out of position, and Lambert struck home sweetly from the edge of the box. Turning to face the congratulations of his assumedly onrushing colleagues, Lambert found himself all alone - the rest of the team were still in their own half. So off set Lambert on his own, applauding himself as he went. The goal was scored, the Cup was Arsenal's, and although the rest of the country did not yet know it, the grown of English football had changed hands.

Although this was the most memorable, and arguably the most important of Lambert's goals, the following season would go down as belonging to the big man. Arsenal secured their first ever League Championship in the 1930/31 season, Lambert featuring in 34 games but more importantly scoring 38 league goals. This was an Arsenal record for all of three seasons, before the arrival of goal machine Ted Drake.

Bolton, Sunderland, Birmingham, Grimsby and Leicester were the teams that were on the wrong end of a Lambert hat-trick that year. However, it must have been Middlesbrough that were the most sick of the sight of him - he scored three in both the 5-2 win at Ayresome Park and also the 5-3 victory over the Tessiders at Highbury.

It is a mark of the mutual respect shared between Lambert and Herbert Chapman that Jack was among the six pall-bearers at the legendary manager's funeral in Hendon on 10 January 1934. Lambert was no Chapman prodigy in 1934, no rising star, not yet a legend and no longer at the height of his powers. Jack Lambert had in fact played what would be his last game for the club three months before - a 1-0 away defeat at West Bromwich Albion.

Lambert's love for Arsenal was not to be damaged by the end of his first team playing career, and he soon emerged as coach and player at Margate FC, the nursery club of the Gunners in the days when such things were allowed. Big Jack and a handful of other former (and future) Gunners helped the Kent outfit to the Southern League Championship for the only time in their history, as well as the Kent Senior Cup and Kent Senior Shield. No matter which stage he chose to perform on, Jack Lambert was still a winner.

There can be no glossing over the tragic end of the Jack Lambert story. Shortly after the outbreak of the Second World War in 1939, Lambert was killed in a car accident that cut short the life of one of the most loved and respected men the club has had the privilege of counting amongst its number. Big Jack had changed the lives of so many fans and players - he was loved by one and all at the club throughout his Arsenal career - and he epitomised the spirit and desire of a club that he helped set on the road to glory.

If he could look down on us all today, and see how far the club has come, one wonders if he would realise just how different everything may have been had he not scored that goal at Wembley in 1930. Spare a thought for Big Jack, trotting around the park with his hands aloft, and thank the Lord that he chose to grace our club with his unique presence.

Signed from Doncaster Rovers for £2,000

Other Clubs: transferred to Fulham for £2,500 in October 1933. Later came back to Arsenal (and Margate the nursery club) in 1936 later coached the A team.