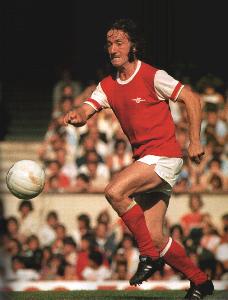 Geordie Armstrong always totally determined would never give up the chase

I was only privileged enough to meet George Armstrong once. It was at an infamous semi-final replay at Villa Park in April 1999. Before the match I was standing under the Trinity Road Stand when a short fit, white-haired gent walked past in a Club coat. Recognising the face that played over 600 times for Arsenal I called his name, he turned to acknowledge me and was courteous enough to make time for a chat. I explained that I'd never previously had the opportunity to thank him for all the pleasure he gave me watching him play for so many years. I found him to be just as I imagined enthusiastic, effervescent, honest, friendly, modest, and an obviously dedicated member of the Arsenal set-up. Geordie was at the time our reserve team coach having rejoined the Club in that capacity in 1990. He'd previously coached at Fulham, Aston Villa, Middlesbrough, QPR and also spent time in Norway and Kuwait before George Graham enticed his old team-mate back to Highbury. I, almost certainly like any other fan that saw him play, never doubted that he could be ever be anything other than a pure Arsenal man. Geordie to me was as Arsenal as Chapman, Bastin, Wrighty or Adams and he ranks up there with any of the great Gunners you care to nominate. His ebullience and popularity as a coach were immense, but that's not why we remember him so fondly.

He arrived as a 17-year-old from Hebburn in the industrial North East and stayed to make a record 621 appearances for the Club, a number only later surpassed by David O'Leary and Tony Adams. In August 1961 George Armstrong formerly with Hawthorne Leslie, a North East Boys club, signed firstly as an amateur and then as a professional in the same month. Within six months his rapid progress warranted a league debut against Blackpool in February 1962. During that season he also deservedly won three England Youth caps. Remarkably, certainly in the context of the modern game, Armstrong remained in the first team pretty well continuously for the next fifteen seasons.

In the 1963-4 season he played 28 league games having established himself as a first team regular. By the 1964-5 season he was winning the first of his five under 23 international caps and was playing predominantly on the left wing for Arsenal missing just two league matches. In the 1965-6 and 1966-7 he missed just five of the eighty-four league games but could do little to raise the standards of a fairly poor side. Unfortunately his playing peak coincided with Sir Alf Ramsey's wingless England team and resulted in him being the greatest Englishman never capped for his country. 1967-8 saw Arsenal reach their first major final for fifteen years only to be beaten by Leeds United in the League Cup Final. This was also George's first season as an ever present, playing in all 55 league and cup matches. The start of the following season saw Armstrong at odds with the Club but he was back in time to reach Wembley again as one of the team to suffer humiliation at the hands of Swindon in the final.

Geordie missed a large part of the 1969-70 season but was back for both legs of our first major trophy in a couple of decades when we beat Anderlecht in the Fairs Cup Final. Many that were there rate the second leg as the most enjoyable night ever seen at THOF. Mind you those of us there had waited a bloody long time for such a night so maybe our extreme gratification and unparalleled pleasure was understandable.

George was a player who could switch wings with ease. When the team deployed only one wide player he often did so repeatedly during the course of a match. His set plays, especially from corners have rarely been equalled since. His ability to cross using either foot with supreme accuracy accounted in no small measure to our often devastating aerial threat during his era. Our first Double owed much to the quality crosses he provided for big John Radford, Ray Kennedy and their team-mates. It was a season in which Armstrong started in every single one of our 64 matches and was replaced by a substitute just twice. Absolutely deservedly George was Arsenal player of the year for 1970. The following season he once again appeared in every single league match and in the 1973-4 season missed just one league game. His consistancy and fitness were remarkable. 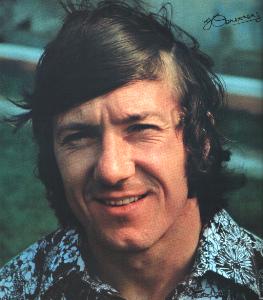 Above all, those of us privileged enough to have seen him will remember the man for his tremendous wholehearted endeavour. Picture that moment in a match when things are not going our way. But a short dynamo wearing the red and white shirt is pressurising a defender. The defender passes but the same man closes down the recipient. Another pass but the chaser continues running down the ball, another hasty pass and our player's still there, tigerishly refusing to give in, another pass another chase and this time he forces an error, we regain possession. The crowd and team are lifted by the sheer determination. Geordie would be the one chasing, with the sort of single-minded enthusiasm that changes matches. But George wouldn't leave it there, he'd be off and running with the ball looking to start another attack. No ball was ever considered to be a lost cause by Geordie no matter how impossible it looked and that was one of the reasons we loved him. One such chase for a lost cause resulted in a particularly memorable goal, when Ray Kennedy met his cross to head home the winner at White Hart Lane in May 1971 to win the League Championship. Five days later Geordie played his part in our historic extra time win against Liverpool in the final.

George had an engine to match any player I've ever seen, he always seemed to be in perpetual motion covering ever blade of grass, whatever the conditions, at least twice. I don't believe I ever saw the man leave the field looking anything other than absolutely exhausted, his face red and his hair matted with perspiration. I'm convinced he felt that unless he'd run himself to a standstill he hadn't given value for money, and no player ever worked more enthusiastically or harder for his pay packet.

George went out with The Arsenal as he came in, enjoying his football. On October 31st 2000 George collapsed at Arsenal's training ground and subsequently died. He was still contributing to the Club he loved and that loved him. Since George's first team days Arsenal have seen the likes of Marwood, Limpar, Overmars and now Pires all of who have been wonderful wingers. None of them though would make my all time Arsenal XI ahead of the late great George Armstrong. You can bet any money you like that if there is a celestial Arsenal XI they would have welcomed Geordie with open arms when his time came and Cliff Bastin will have been hard pressed to keep his place in the team ever since.

Arsene Wenger - I would like to take this opportunity to pay my tribute to George Amstrong, our reserve team coach who died so tragically last week. The training centre at London Colney will not be the same without him. He was such a bubbly, enthusiastic guy who loved Arsenal... He was committed, honest and I personally loved him a lot. He was a man who projected the qualities that you associate with Arsenal. I believe that the culture of the Club is transmitted by people who stay and keep that kind of identity. He was one of those people. I always supported him because of that. Look how many games he played for the Club, look how much he contributed to the Club when he finished playing. Look how many young players were prepared for first team football at Arsenal under his guidance.

Tony Adams - Along with so many people connected with Arsenal, I thought the world of George Armstrong. His death last week was sudden and tragic. I played under him on many occasions when I was making comeback games in the reserves and a more honest and enthusiastic man you couldn't wish to meet.

Bob Wilson - After 37 years friendship I cannot think of a more genuine fella than 'Geordie'...Geordie was always a giver, never a taker...As a player I thought his crowning moment was in 1970 when, after the Club had gone 17 years without a trophy, he produced one of his greatest ever performances in the second leg of the Fairs Cup Final against Anderlecht and we overturned a 3-1 defecit from the first leg with a 3-0 victory at Highbury to win the Cup. As a coach Geordie was definitely one of the 'old school' who demanded 100% either when you were training or when playing for the red and white shirt of Arsenal... As a reserve team coach Geordie also had to be a mentor to the younger players and a psychiatrist for the older ones but because of his sensitivity he handled this with ease...Arriving at the Training Ground on the Wednesday, just hours after his death and seeing GA on the locker next to mine and his boots still hanging up was an indescribable experience. I will miss him terribly.

Peter Hill-Wood - He was undoubtedly one of the warmest characters that I have had the pleasure to come into contact during my association with football. Of course, 'Geordie' was also one of the finest footballers that this great Club has been privileged to call an Arsenal Player. He was extremely talented and his talent was matched by his consistency - that led him to become the Club's record appearance maker - and a level of commitment that was second to none...As last week's tragic news was being absorbed by everyone associated with the Club - including the supporters who had such a special relationship with Geordie - the sense of shock and sheer disbelief was a true indication of his immense popularity. George Armstrong was a wonderful man in every respect, he will be greatly missed.

Vic Akers - I've been involved in football for 30 years. In that space of time you meet a lot of people, they come and they go. In my experience you find very few who are as honest and genuine as George Armstrong... As a coach Geordie was excellent with his players. They responded to his enthusiasm and knowledge and in return he was very proud of his achievements. He loved to see lads he had coached progress at the Club and continued to take a real interest in their achievements if they left Arsenal... Geordie was a real football man...He, and of course his many unwavering opinions, will be greatly missed around the place.

Ashley Cole - Geordie has been with me since I was at Junior School and played a big part in my development as a player and a person. I still hear his voice and it's so difficult to comprehend that he's not around any more. I always expect to see him as I walk around the corner of the training ground. He was a Highbury legend and a big loss to Arsenal, Geordie is irreplaceable. 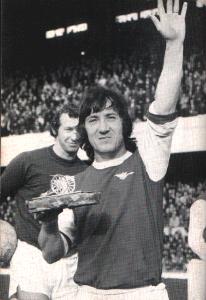 Position Winger, but covered every blade of grass

Joined as Hawthorne Leslie a boys club, signed as an amateur in early August 1961 and as a professional on 24th August 1961