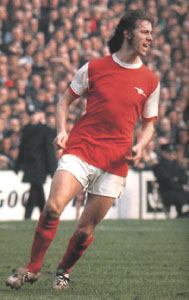 Charlie George : The hero with the long hair

Many young lads have dreams of scoring the winner for their favourite team in The F.A Cup Final at Wembley. Charlie's is the story of a lad who's dreams came true. Born Frederick Charles George on the 10th of October 1950 in Islington, London. He was brought up only a mile or so from the football club he adored and was later to become synonymous with. He attended Holloway County School where he quickly became the prize asset of the school team. An old sports teacher describes his first meeting with Charlie, " I got them to line up and pick two teams. They all lined up behind this one kid, very wiry, didn't say a lot... didn't need to! Christ, he was simply light years ahead!" Even as a 13 year-old, the power in his feet was noticable, he could kick a ball almost the entire length of a football pitch. Charlie at this time was also playing Sunday football in The Regents Park Boy's League for a team called Mildmay. When he wasn't playing football he could quite often be found standing on the terraces of The North Bank watching his beloved Arsenal play. It wasn't long before he himself was "spotted" by Arsenal and signed schoolboy terms for the Gunners.

Ex Goalkeeper Bob Wilson remembers, " He was 13 and I was an amateur, new into League soccer from teaching. At the time I trained in the evenings with the school kids in their twice-weekly sessions. One of those kids was Charlie. He was class then. I've seen nothing to change that opinion in all the years since. Most players have an all round talent with, perhaps, one or two better aspects to their play, but Charlie was one of those rare players who had the lot. I'm not exaggerating when I bracket Charlie with the likes of Jimmy Greaves, George Best, Dennis Law, Johan Cruyff and Duncan Edwards, he was that good".

His apprenticeship went well and Charlie made his full first team debut at the age of eighteen. It was the opening game of the 1969-70 season verses Everton. He made a total of 39 appearances in his first season, scoring 10 goals. He would never play in as many games in a single term at Highbury after this first season, which saw him end up with a winners medal from Arsenal's first European triumph, The Fairs Cup. Greater things were to come. Injury saw Charlie's appearance tally curtailed to 28 for the famous "Double" team of the 1970-71 season, having broken his ankle in the opening game. He again scored 10 goals this term, none more memorable than the winning goal in the F.A Cup Final against Liverpool. Securing "The Double" a mere five days after winning the Championship at White Hart Lane. A dream come true indeed. 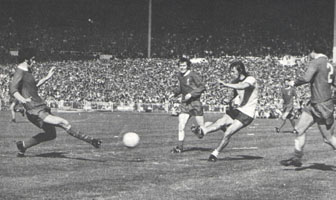 From there on in Charlie became not just an Arsenal Legend, but an icon of the seventies, taking over the mantle from George Best, inspiring many a haircut and pop record. There was even a cafe in Mountgrove Road, N5 named "The Charlie George Cafe". Unfortunately something else he picked up along the way was the "Cockney Rebel" tag. His career was plagued by disagreements with various managers and figures of authority, with whom he had also had his run-ins since schooldays. A few more seasons came and went with Arsenal struggling to live up to what had been achieved in the 70-71 season, and the team began to break up. Sadly during the 1974-75 season, after a series of rows with Manager Bertie Mee, Charlie saw his days at Highbury numbered and put in a transfer request. The request was granted and in 1975 after 10 years at Highbury, he signed for Derby County for a fee of £90,000.

It was while at Derby that Charlie won his one and only England cap. In 1977 against The Republic of Ireland. England then under the managership of Don Revie. Revie was another man that Charlie couldn't see eye to eye with. Disagreements as to his role in the team and what Charlie saw as the insult of being picked for Revie's England "B" team led to Charlie telling the manager what he could do with his "B" team and probably put the mockers on what should have been many more international honours. After Derby, he also went on to have spells playing for Southampton, Nottingham Forest and Bournemouth. 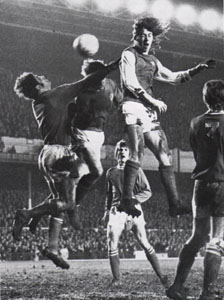 He was the type of player who left an impression on everybody who watched him play. He was a class player with both power and grace, but Charlie was a rough diamond. He wasn't the only one in the famous Double side either. Maybe that's why they all just clicked. It would have been interesting to see how his career would have panned out had he not had the temperamental and stubborn side to his personality, but then he just wouldn't be Charlie, would he? When he finally hung up his boots he went in to the licencing business and ran a pub in Hampshire. Charlie has since returned to North London where he first bought into a partnership of a garage business.

He is now back at Highbury working as a Match-day host and also helping to run The Arsenal Museum. It's like they say, "You can take a man from away from The Arsenal, but you'll never take The Arsenal away from the man". Needless to say that Charlie can still be spotted regularly sitting in the stands with the rest of the Gooners, cheering on his side just as he did as an 8 year-old kid. If ever there was a "Gooner", then..........

Joined as an apprentice in May 1966, turned professional February 1968

Sold to Derby County in July 1975 then Southampton (loan spell to Nottingham Forest) then to the USA, Hong Kong, Dundee United, Bournemouth and Coventry