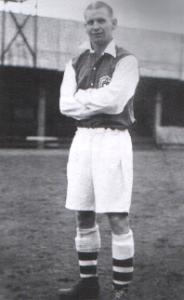 Youngsters among us may say Merson, Marwood and Smith. Slightly more weathered followers may settle upon Kennedy, Radford and George. However, the only true answer to the question 'Which is the most complete Arsenal attacking unit of all time?' is made up of three of the most famous names in the history of English football: James, Hulme and Bastin.

Cliff Bastin was born in Exeter on March 14th 1912, he was capped for England schoolboys versus Wales when he was just fourteen and made his senior debut for Exeter City at the age of sixteen years and 1 month, remarkably early in any era. The match itself, a 0-0 draw at Coventry, was largely uneventful, but it was only a week later on April 21st 1928, that Bastin first showed the talent for which he later became so well known - goal scoring. He appeared on the score sheet twice in Exeter City's 5-1 win over Newport County and heads were already beginning to turn in wider circles.

However, it was wasn't Bastin who attracted Arsenal's manager Herbert Chapman to Exeter City's game at Watford, but a home player named Tommy Barnett. It was not long however before the unfortunate Barnett was forgotten (although not by Watford fans as he became one of their all-time top scorers), as Chapman found himself gazing in awe at the 16-year-old lad with the amazing ball control. He was so impressed that he set off for the West Country the following morning to persuade the boy that London was where his future lay. Although Chapman found it rather harder than expected to convince Bastin, who was reluctant to give up his Devonshire life, he eventually won his signature, and so began the Arsenal career of one of the most exceptional players the club has ever seen.

Bastin made his Arsenal debut away at Everton on October 5th 1929 playing at inside-right in a game that ended in a 1-1 draw. The Arsenal goal came from the man who Bastin would connect so well with in future years, Joe Hulme. His home debut came seven days later, another 1-1 draw, this time with Derby County. Chapman clearly felt that Bastin was not yet ready for full first team action, as he was dropped from the side for the next twelve games. He was no better an omen on his return, a 2-1 Highbury Boxing Day defeat to Portsmouth. This was a game incidentally played the very day after the two sides had met at Fratton Park, where Arsenal had won 1-0. This game began a disappointing run of five games without a win, but the period was most notable in hindsight for Bastin's first Arsenal goal, in a 3-2 home defeat by Sheffield Wednesday on January 4th 1930. Bastin eventually finished the season with 21 league appearances to his name, and seven league goals to his credit in a season where Arsenal finished fourteen in place.

However, the season will forever be remembered for the first ever Arsenal trophy, following a 2-0 FA Cup Final victory over the former kings of English football Huddersfield Town, the Club that Chapman had taken to three Championships. In the final itself his quick wall pass from Alex James' free kick resulted in James netting the vital opening goal. Bastin weighed in with four goals during the run to the final, including the crucial equaliser in the 2-2 draw with Hull City in the semi-final. Arsenal won the semi-final replay 1-0, and Bastin had shown for the first time how vital he was becoming to the team he would serve with such proficiency for the next 17 years. 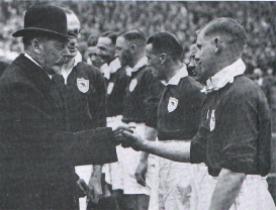 Cliff Bastin was one of these rare breed of footballers, a man truly respected and admired by his fellow professionals. His footballing talents were clear for all to see. An incredible turn of pace and acceleration were combined with a cunning tactical mind, which enabled so many insightful passes to his target man. Be it big Jack Lambert or later that brave goal scoring machine Ted Drake. But his clear mind did not only apply for 90 minutes once or twice a week, even off the field Bastin was renowned for his cool temperament, his inability to be riled and his great sense of devotion to duty. Bastin's physio at Arsenal, and later the club's manager, Tom Whittaker, said of him in 1950: 'Coupled with his sincerity and his loyalty to all his bosses, he had a trait few of us are blessed with - that is, an ice-cold temperament'.

Whittaker incidentally aided Bastin a great deal during his career, as he did so many players, due to the winger's notorious left knee. Bastin's cartilage had a habit of slipping out of place during matches, and Whittaker was forced on many occasions to manipulate it back into place. The cartilage eventually became so troublesome that it had to be removed. It was so swollen and misshapen that it ended up being put on permanent display at the Royal College of Surgeons.

But it was with Joe Hulme and Alex James that Bastin proved so inspired. On Bastin's arrival, Hulme had already been at the club for 4 years, but it immediately became clear that Chapman's revolutionary policy of forcing his two wingers inside opposition full-backs, where they were expecting the old fashioned run down the outside, was to prove a major weapon in his armoury. The classic Arsenal move became the ball from James (always the playmaker of the team, calling all the shots) down the line to Hulme, who would then play the ball over the defence to the left where Bastin was lurking. The inevitable end to the move was a Bastin dribble and goal, or failing that a set-up by Bastin for a goal for Arsenal's legendary Scottish centre forward Jack Lambert.

Bastin's contribution to Arsenal's first ever league championship in 1930-31 was immense. He was the only player to play in all 42 league games that season thus becoming at only eighteen/nineteen years of age the youngest ever to do so for the Club. The legendary left flank partnership with Alex James had begun to flourish during the season as had his goal scoring feats. Cliff finished 3rd top scorer with 28 goals, not far behind the 31 bagged by David Jack and the 38 from Jack Lambert. His goals included a hat trick against Derby at Highbury and three penalties through the course of the campaign. How many eighteen-year-old penalty takers are there in the Premiership today? This contribution helped Arsenal win the title having scored the most goals of any league winning side 127, a record that still stands today.

On 18th November 1931 at the age of nineteen years and two hundred and forty-nine days he won the first of his England caps, this being against Wales. He thus became the youngest player to win an England Cap, League Championship and F A Cup winners medal. Thereafter he was he was known as 'Boy Bastin' because he had done everything in the game whilst still a boy. Bastin's most successful goal scoring season came with the club's second championship during the 1932-33 season when he finished top scorer with 33 goals a tally which to this day remains a record for a conventional winger. Once again he was the only ever present in the side.

However, the arrival of Ted Drake in March 1934, combined with the vital cartilage operation, meant that Bastin's goal scoring was curbed. While Bastin was still regularly on the score sheet, Drake was knocking in 3 or 4 a match at times, but far fewer would have been possible without the flying wingman. Had assists been recorded in those days his figures would have been astonishing. Most Arsenal fans know how the story unfolds. The flying winger became the record goal scorer for the Club. A record that lasted for over 50 years, and was only broken by Ian Wright on that historic day in 1997 against Bolton. Cliff Bastin's record was 178 goals in 396 games. Which was an incredible record for a man who spent the vast majority of his career on the wing. During the height of his career he also enjoyed a successful international career, playing for England twenty-one times. On one very famous occasion he joined six Arsenal teammates to face Italy in the infamous 'Battle of Highbury' of 1934. 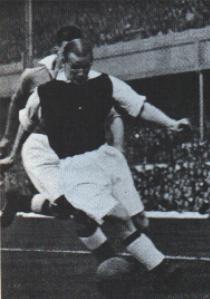 By the resumption of the full competitive schedule in August 1946 Cliff Bastin was coming to the end of his career. The outbreak of war proved to be disastrous for so many players' careers and Bastin was no exception. Due to an inherent problem with his middle ear (part of which later had to be removed), Bastin's deafness disqualified him from the armed forces, so he took to manning the Air Raid post on top of the main stand. Not even Cliff Bastin, however, could prevent a number of large bombs landing on Highbury, despite the presence too of an enormous barrage balloon. He and many others though, were luckier than the nine Arsenal men who gave their lives during the conflict were. During the war Bastin continued playing for the club in the various new competitions that were drawn up and changed from year to year such as the Football League South, Football League South Cup, Football League War Cup, London War Cup and London League. Arsenal Stadium was converted into an ARP centre during the War so home matches were played at White Hart Lane. He played in some 244 matches during this period and scored another 71 goals. The teams that represented Arsenal often included many footballers that happened to be staying in or were in transit through London at the time. Stan Mortenson, Stanley Matthews and Bill Shankley are just three of the more famous names that donned the Arsenal's red and white shirt.

He played his final six games for the club that season, ending ignominiously in a 5-2 away defeat to Manchester Utd on 28th Sept 1946. Arsenal finished the season in 13th, possibly shocked at the retirement of the great man. Or possibly not. There can be no doubt that without Bastin, Arsenal would not be the club they are today, with a proud history and wonderful record of achievements. Bastin epitomised the Chapman era with a cool, calm attitude that many of today's Premiership hotheads would do well to emulate. It was fitting that, even although he didn't personally attend the official celebrations, Bastin was alive to witness the centenary of the club in 1986. There can be no question that without him, there may have been a great deal less to celebrate, the proceedings possibly more low-key, and the legendary Arsenal of the 1930s might have been no more than just another team.

Which couldn't be less of the truth, thanks to Cliff Bastin.